Some people’s Zombie Plan requires them to travel, and in Dead Ahead you’re traveling through and running from zombie hordes on a motorcycle with nothing but your helmet, your gun, and your riding skills (unless you pay $1.99 for a crack-shot companion). 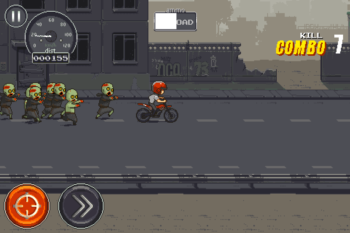 These guys are quite lively considering they’re dead

Movement is simple in Dead Ahead. You use the slider or arrows on the right side of the screen to move up and down the road, and you touch the “Fast Foward” button to accelerate, and pop-a-wheelie. Unfortunately, no matter how fast you go the zombies will still catch up to you. Dead Ahead redefines the Fast Zombie. 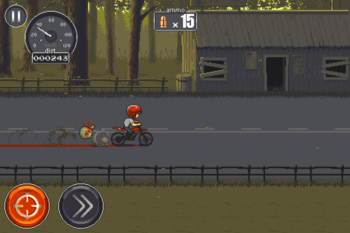 Although, Dead Ahead is not just about endlessly running away from Zombies on your motorcycle, it’s also about killing zombies, and scoring huge combos. Each of the 10 weapons, such as a shotgun and grenade launcher, and 6 motorcycles, will give you a satisfying result when you fire at or run over a zombie. You’ll have to complete objectives and level up to unlock the guns and motorcycles, and earn high kill counts and combos to receive enough coins to buy them. 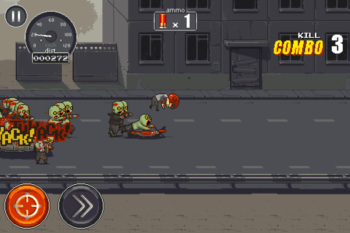 I had a lot of fun playing Dead Ahead. Watching a zombie’s head roll, and seeing the trail of blood behind my wheels after running one over made me smile. I kept playing because I wanted to complete more objectives, level up, and unlock quicker bikes, and deadlier guns. Also, I was always earning a lot of coins, so I never had to buy coins through an IAP to afford any of the bikes or guns I unlocked. 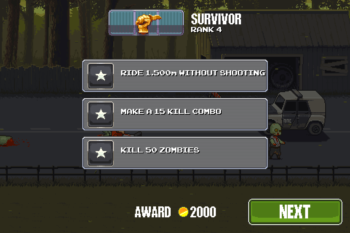 Objectives complete. What will the next level bring?

Even though you’ll never be able to out run these very athletic zombies, Dead Ahead is a fun endless runner. You can download Dead Ahead for free from the App Store here. Then, tell us about your Zombie Plan.