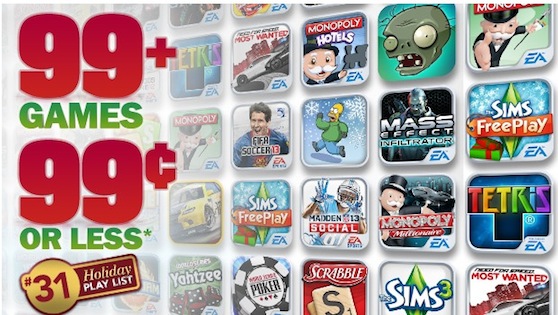 Electronic Arts is definitely getting festive again this year, as they have announced a massive holiday sale. Every iOS title for either the iPhone or iPad has been discounted to $0.99 or free:

Join the festivities with the Big Holiday Sale. Over 99 of EA’s best mobile games are just 99¢ – or FREE. This holiday season, buckle up and start some trouble in the critically-acclaimed Need for Speed Most Wanted or explore endless possibilities in The Sims FreePlay.

After the holidays, start your year off right with even more savings in our New Year’s Sale. With over 55 games for iPhone, iPod touch, and iPad on sale, there’s plenty of fun to be had.

You can check out the entire list of games on sale here. Previous EA sales had some titles excluded in Canada, but after a quick check, every title here is either $0.99 or free as stated. This would be the time to pick up the HD iPad titles you’ve been waiting for.

Let us know what games you think are worth downloading in the comments.