Facebook has released an update to its iOS app to allow iPhone users to change their cover photos right from the app. Other updates include the addition of fewer taps to start a group message. You now just tap contact names to select them and once you start typing the group chat will be created. Immediately after being created the group conversation asks you to “Name this conversation” right at the top, which according to Facebook is faster than before.

What’s New in Version 5.6
Keep your timeline fresh by updating your cover photo on the go.
• Take a new cover photo or choose one from camera roll (iPhone only)
• Fewer taps to start a group message
• Easier to name and find group conversations

To change your cover photo within this latest Facebook for iOS update, just tap your cover photo and you’ll be greeted with the following options to either take a picture or choose from your camera roll, as shown below: 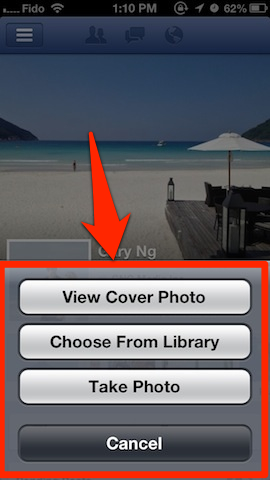