Facebook Messenger for iOS has been updated to add stickers to messaging, plus also bring back the ability to delete conversations by swiping. Facebook notes stickers will be available to everyone over the next few weeks:

What’s New in Version 2.4
Bring your messages to life with stickers:
– Just tap the smiley to add a playful kitten or another cute critter
– Send any sticker with one tap
– For more sticker options, tap the basket

Other new features include:
– Delete conversations from your inbox just by swiping (back by popular request)
– Bug fixes 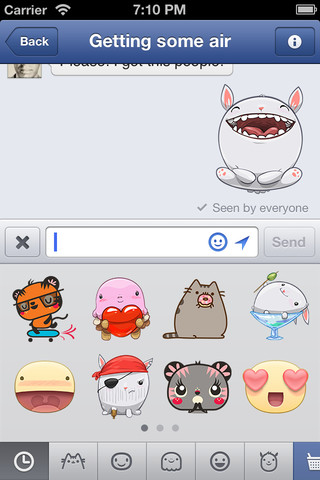 How to use stickers? Within the chat window, tap the smiley face icon to bring them up. Users have the option to download other types of stickers by tapping the cart icon, which shows you a plethora of options.