Facebook Poke, Which Stores Your Pokes for 2 Days, Hits #1 in the App Store

Facebook launched their Poke app yesterday and in less than a day it has hit the top spot in the App Store under the top free iPhone apps:

TechCrunch sources note Facebook CEO Mark Zuckerberg had a directly role in creating the app, in particular coding and the ‘poke’ sound you hear in the new app. The story behind the creation of Poke in just 12 days? A small team at Facebook blasted the app together in an attempt to have it submitted before iTunes Connect closed for the holidays:

We heard Facebook made attempts to buy the small startup, but the team wanted to stay independent. That’s when Facebook and Zuckerberg went into hacker mode. With just a few weeks until Apple stopped accepting submissions of new apps before Christmas, it would take a sprint to get Poke built in time.

So a small squad including Facebook Director Of Product Blake Ross kicked development into high gear, Zuckerberg lent a hand with the programming, designers Mike Matas and Sharon Hwang created the icon, and Facebook just made the deadline and launched the Poke app this morning.

A separate report by TechCrunch notes your encrypted Facebook Pokes are stored for two days, as explained by the social network:

All Poke messages are stored in encrypted form and retained for two days after the last recipient views the poke — a process that helps facilitate abuse reporting. After that period, a Poke’s encryption key is deleted. However, it may still be possible to recover that key from logs or backups. After a fixed time period, this key becomes inaccessible, rendering the content completely unreadable (unless it was copied for abuse reporting.) Today, that fixed period can be up to 90 days, but we are working to significantly reduce that period over the next several weeks as we verify the stability of the Poke deletion system.

Did Facebook Poke Have an ‘Unfair Advantage’ to Hit #1 in the App Store?

Facebook Poke works as advertised, but it’s not a ‘blow away’ app. How did it get to the number one spot so quickly? AppsFire believes it was due to the following unfair advantage–Facebook advertising Poke to users within its existing iOS app: 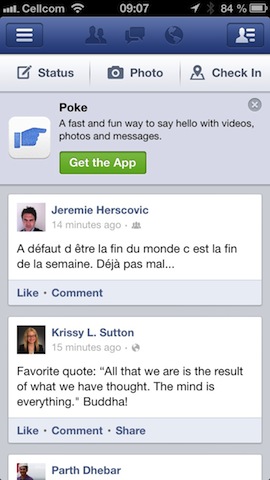 I’m sure that partly helped launch Poke to the number one spot, but you could say the same for Google advertising Google Maps for iOS using similar methods, all over the web. But with Google Maps, that was an app we all were keen on trying out. As for Poke? I’m not sure if there was demand for the app, other than people wanting to test the latest app. Just read the mixed reviews in iTunes and you’ll get a better picture of how people feel about Faceboke Poke.

Google and Facebook apps dominate the top 5 free apps in the App Store. How about that them apples?