One of the biggest gripes people have had with their iPhones is that fact there is no Flash support. This makes a lot of the world wide web un-viewable on the iPhone and iPod Touch. Many sites embed video using Flash, or have Flash games, or are completely built in Flash. This can be frustrating when you’re on the go and need access to certain content.

One such site is Facebook. Whether you’re the full website, or using Facebook mobile, or even the official Facebook app for iPhone, you are not able to view Facebook videos on your iPhone. Well, developers Kemal Taskin & Elma DIGIT@L have released an app the solves this: Facebook Video Player. This app, just released on March 26th, allows you to connect to Facebook and view the full featured site, and play videos that you and your friends have uploaded!

Here’s the official description, from the App Store:

Finally, Facebook videos can be watched on your iPhone or iPod Touch.

Kemal Taskin & Elma DIGIT@L present you the most impressing and useful Facebook application called “Facebook Video Player”. With this application you can navigate Facebook pages and watch Facebook videos by touching the magic “Play” button.

Loved the video you just watched? Then press the “Favourite” button and that video will be added to your favourites so that you can play them later with a single tap.

Note:
Only videos uploaded to facebook.com are supported by this player! Almost all Facebook videos can be played with this player. The ones that don’t play are encoded with a codec that isn’t supported by the iPhone!

Facebook Video Player worked awesome, for me. A simple, Facebook-esque interface makes it easy to log in and navigate Facebook. There is no 3rd party Facebook app you need to “install” or “allow access” to your Facebook info. You just log in, find a video, and hit the Play button at the top of the screen.Â If you want to save the video as a favourite, just tap the star at the top of the screen. Then, when you want watch the video again later, just tap the Favourites tab at the bottom of the screen. 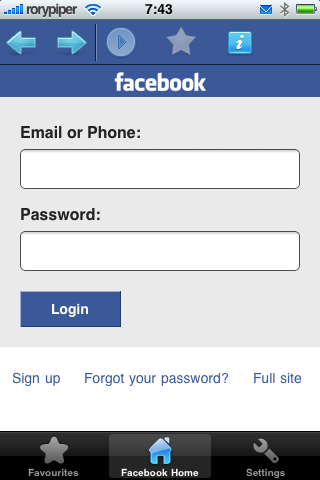 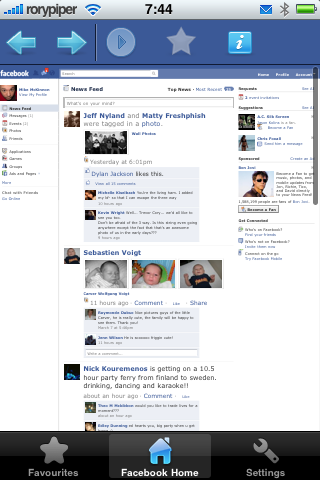 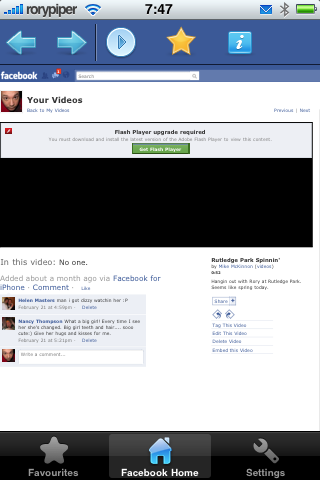 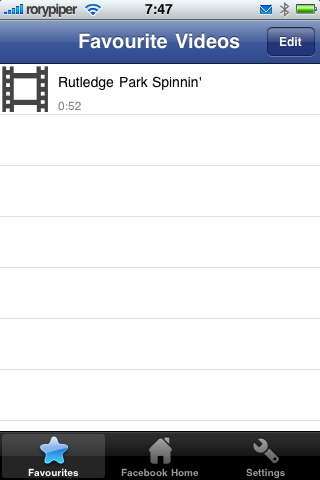 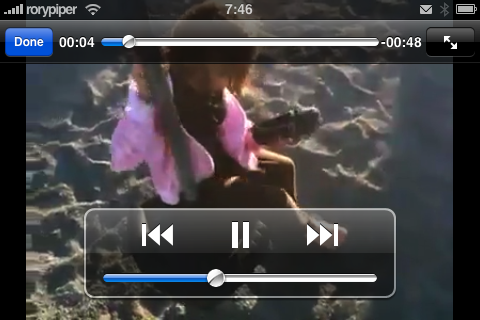 Facebook Video Player is available in the App Store now, $1.99. Presumably, Facebook will be adding this feature to it’s official iPhone app in the future, but there is no official word on when this will be coming.

Hey, follow me on Twitter, if you want: @rorypiper. You can check out more of my stuff at iEvolution and at Green Candy.