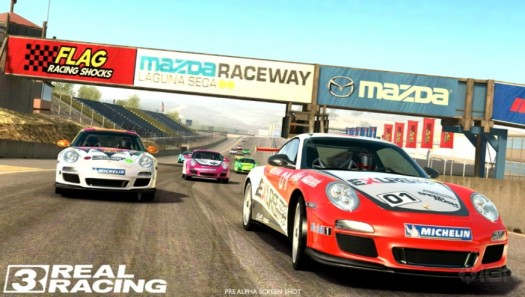 Firemonkeys, the new studio from EA, combining the IronMonkey and Firemint gaming studios, has just announced the third iteration of Real Racing. The original cutting-edge game was released during the summer of 2009. With great public out-roar, Real Racing 2 was released a year-and-a-half later in December of 2010.

From the App Store, here is a description of Real Racing 2:

Race the way you want to, with 6 different game modes. Challenge friends in local or online multiplayer and leave them in your dust! Work your way up from rookie to world champion in Career mode. Slice off another split second in Time Trial and upload your personal best. Only got a minute? Get behind the wheel for a Quick Race.

Tear through forests, seaside circuits and burning deserts, with the roar of the engine and the sounds of an adoring crowd in your ears! Beautiful track environments, carefully detailed cars and console quality 3D sound effects create the most exhilarating racing experience on the iPhone.

Intuitive, realistic controls take care of things under the hood just like an expert pit crew, while you focus on your racing line. Accurate surface variations including asphalt, grass, gravel and chicanes affect vehicle speed, responsiveness and handling.

Now just a year-and-a-half later, Real Racing 3 has been announced for both the iPhone and iPad. You can expect the same great features to return, only with a plethora of new tracks and enhanced graphics. Watch the trailer below, if you love racing games, I’m sure you will enjoy this one.

Real Racing 3 will be the first game of the Real Racing series to include real race tracks, including the Indy 500 and Silverstone Circuit. The game will also allow up to 22 cars to race simultaneously.

EA expects the game to launch later this year. Do you plan to purchase a copy?