Flickr for iOS Gets Auto Uploader for Photos, Videos: Time to Use that Free 1TB

Flickr today has released version 4.0 of its iOS app, which comes with a new auto uploader so you can take all your videos and images to the cloud, and use the free 1 terabyte (1000 GB) of storage from the company, which Yahoo says can be roughly half a million photos.

What’s New in Version 4.0
• Put your free 1000GB to work like never before – auto-uploadr now grabs all photos and videos on your device. They’ll be private, until you choose to share them!
• A timeline view with improved browsing, organization and sharing.
• Flickr got a facelift with an all new elegant, approachable look and feel to match your spiffy new camera roll.
• Unleash your creativity with photo edits straight from your Flickr photos.
• New and enhanced photo filters to help get your snaps share-ready.
• Share to Instagram.
• Performance improvements throughout the app.

Also new is a revamped timeline view that looks similar to the iPhone’s Camera Roll, the ability to edit photos right within the app, new photo filters and the option to upload to Instagram.

The automatic uploader defaults to Wi-Fi, but the option is there to use cellular connections if you dare. All uploads are private by default and are only shared if you choose the option to. 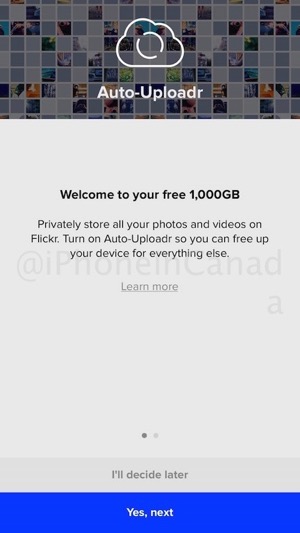 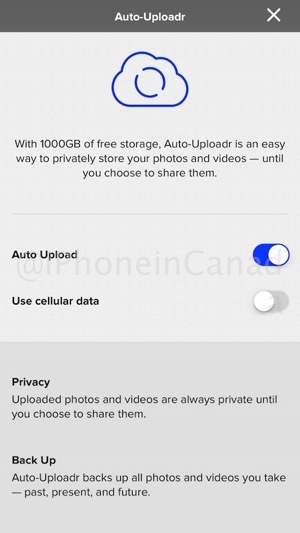 Back in 2013, Flickr introduced free 1TB of storage for all users—now is definitely the time to take advantage of it. This new auto uploader, coupled with Yahoo’s free 1TB of storage essentially mimics other online photo storage options out there, such as Dropbox’s Carousel (limited storage unless you upgrade) or Amazon’s Cloud Drive, which launched earlier this year in Canada.

The difference here though, is Flickr comes with 1TB free and allows video uploads (unlike Amazon). For new parents looking to take their mobile photos to the cloud for safekeeping, using Flickr now is definitely a no-brainer.