Fring is a fantastic free video chat app that’s been around for a while now. Back in late April, they introduced 4-way video chat. The app was updated yesterday with a new feature called ‘Playground’, that allows you to video chat with other Fring users from various groups. It’s similar to the ‘hangout’ feature in Google+, or if you like to live your life on the edge (and see nothing but ‘naked’ dudes), Chatroulette.

* FREE video chat for up to 4 friends
* Video chat worldwide to any Smartphone (iPhone, Android, iPad, iPodTouch, Nokia)
* Use any data plan (3G,4G & WiFi)
* Optimized for iPhone, iPad and iPodTouch with DVQ™ technology
* See your friends real-time availability, text chat with them before video-chatting them

GROUP VIDEO CHAT with FRIENDS
* Get 4 friends together to Group Video chat, jam, reunite, sing, dance or whatever you do when you get together. 4 friends on 1 screen.

GROUP VIDEO CHAT in PLAYGROUNDS
* NEW Group Video chat about your favorite subjects with any fring user (you can also add them as friends). Just drop by the Playground to Video chat with other fring users with the same interests and build face-to-face-to-face friendships.

I can’t remember the last time I used FaceTime, but when I did it was pretty awesome still. Given iChat on the Mac has multi-user video chat, I would expect future versions of iOS to include the same capability. Fring is still a great way to have 4-way video chat, although each friend must have the app installed. 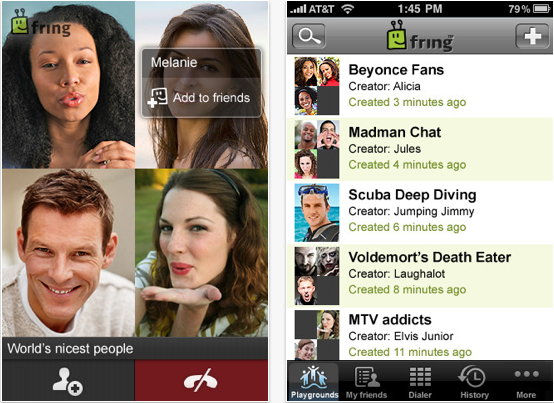