Following the public release of iOS 6, tons of mainstream iOS app have received updates in the past 48 hours and now, Garmin has also pushed a significant update to its NAVIGON navigation app with public transportation features, Apple Maps integration and support for new 4-inch display of the iPhone 5. 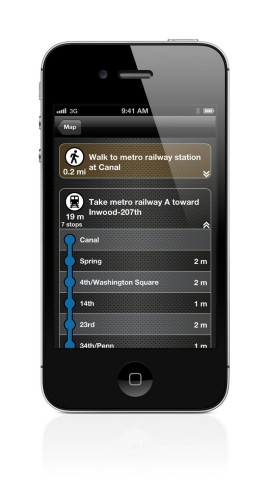 NAVIGON by Garmin is considered by many as is currently the best turn-by-turn navigation app for iPhone with world-wide options and offline support. The new update has made it even better by allowing users to simply select any address in Apple Maps and they will be offered the option to navigate to the selected destination using their NAVIGON app. The update also adds full support for the 4-inch display of the iPhone 5.

– URBAN GUIDANCE considers public transportation options, such as subways, trams, busses and water taxis, when calculating pedestrian routes. You will be guided to a transit stop by foot and you’re able to look up detailed information on what line to take and where to get off. The feature is available through In App Purchase.

– LAST MILE automatically offers a pedestrian navigation when you park your car near your destination. The parking position will be saved and the app switches into pedestrian mode to provide walking directions.

– We’re celebrating the 3rd birthday of the NAVIGON app and give away a free map update to all users.