Google has issued a warning to Gmail for iOS users about the existence of a bug discovered in their emailing service. The bug may result in users accidentally deleting emails or reporting others as spam, the search giant warns. 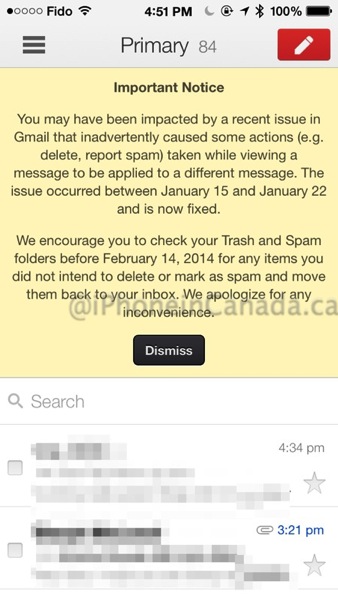 You may have been impacted by a recent issue in Gmail that inadvertently caused some actions (e.g. delete, report spam) taken while viewing a message to be applied to a different message. The issue occurred between January 15 and January 22 and is now fixed.

The Verge was first to report the issue. As you can see from the above warning, Google has since fixed the issue, but it strongly recommends that Gmail for iOS users check their Trash and Spam folders before February 14, 2014, and move items users did not intend to move to these folders to their correct place: the inbox.

Are you affected by this issue?