Google+ iOS App Gets a ‘Sense and Soul’ Update

Google+ for iOS has been updated today, and the app looks great. It flows well and is a much cleaner experience than its initial debut. It looks great, but the big question is: will I start using it?

Here’s how Google describes the new ‘sense and soul’ of the new update:

A feast for the eyes
Full-bleed photos and videos are cool. But you know what’s really cool? Content so immersive it remakes your mobile device into a rich carousel of beloved memories and breaking news. That’s the Google+ experience we aspire to, and today’s release helps us get closer:

A stream you can swim in
Looks alone aren’t enough—you also need an app that’s fast and fluid. Even a simple swipe gesture can inspire the same “wheeee!” as the bubble wands and ball pits we enjoy(ed) as kids. So today’s update pays special attention to fun and performance: 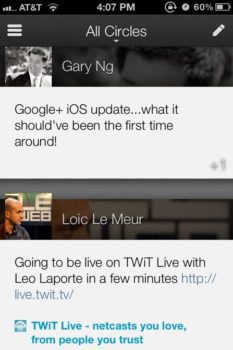 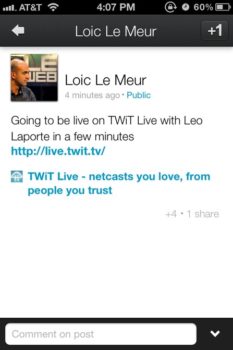 When you launch the app it’s a much cleaner interface. As you scroll down new updates appear via a fade in effect. Tapping the menu at the top gives you instant access to your circles, profile and more.

Are you still using Google+ still? Add me to your circles here. Download Google+ for iOS here.