Google Maps for iOS has been updated to include real-time updates of how busy destinations are, before you visit, plus also notes the average time people spend at locations for “easy decision making”, says the company. The feature first launched back in 2015 but now it has made its way to their iOS app.

The feature is live in Canada, as you can see in our example below for Walmart. The “Live” feature says it’s “not busy” and the average time people spend there is 10 to 45 minutes, according to Google (the results may be skewed a bit since this location is a concrete bunker…). 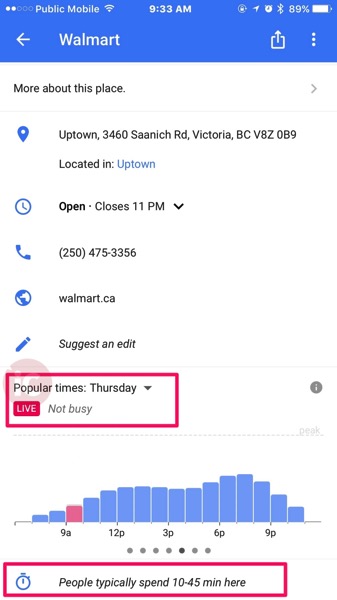 The feature is made possible by Google crowdsourcing anonymous user data from mobile devices at locations, to pinpoint how busy a particular location is.

You can now also quickly access addresses in your clipboard while searching (like Chrome), while the update brings bug fixes as well.

Another small but important and helpful update to Google Maps. Click here to download it in the App Store. There’s no way we’re going back to Apple Maps anytime soon.