Google Voice search has started speaking different languages. Well, it already spoke English, but, starting today, if you speak French, German, or Japanese, you can ask questions and get answers from the updated application in your native language, Google announced today. 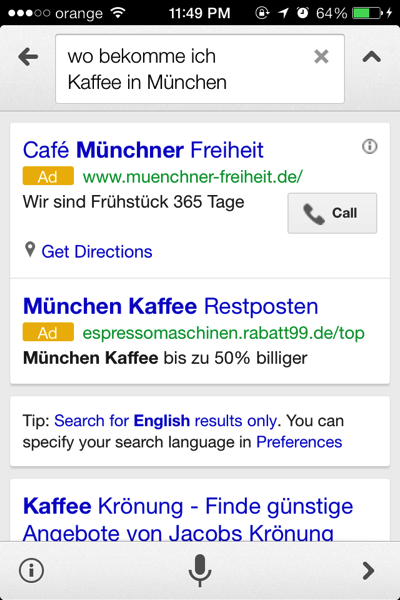 So, in addition to English, which has been around since its launch, now German users can ask for a coffee shop in München, for instance, in their native language: Ask “Wo bekommen ich Kaffee in München?” and the app will reply with a list of local coffee shops.

In case you are French and don’t know where the Eiffel Tower is, you can ask for its location, but you can get information about its height as well by asking: “Quelle est la hauteur de la Tour Eiffel?”

To try it out, users can tap the microphone and ask for something.

Users must have the latest version of the app to get Google Voice to speak in these four different languages. And it will, indeed, speak the answer to many of your questions, Google promises. To activate this feature, launch Google Search on your iDevice, go to Settings > Voice Search and set the desired language. Tap done and you are good to go. In fact the app supports a long list of languages now, but Canadian French isn’t supported yet.

Another promise is that they will continue rolling out new languages, so this will be an interesting addition to the application for its users worldwide.