The competition in the app industry is already hot: In an interesting turn of events, Google is ahead of Apple in the App Store as the top publisher, according to App Annie’s latest app index. 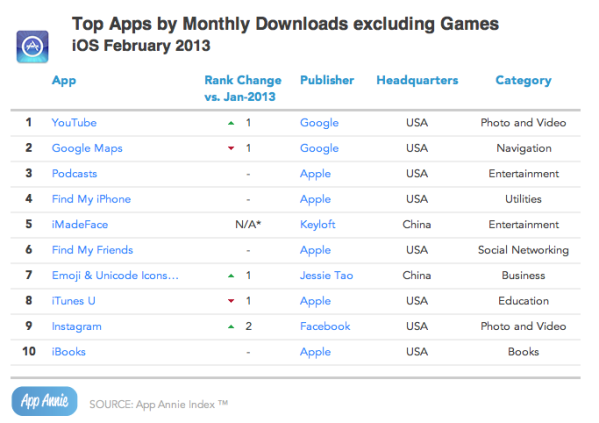 In the February report, App Annie has split the index into two parts: A Game Index and an Apps Index, with the latter including everything else but games, to provide a more focused insight of how different publishers and apps are leading the app stores.

As a result, Google ranked as the top publisher by monthly downloads excluding games in the iOS App Store for February, with Apple right behind. While the first two spots belong to U.S. companies, Cypriot company Outfit 7 has grabbed third place, diversifying the top list dominated by U.S. and Chinese publishers.

However, when it comes to top 10 publishers based on monthly revenue excluding games, the list is dominated by U.S companies and led by Apple, which has a total of 19 apps in the App Store.

The most downloaded app in February was YouTube, followed by Google Maps, but Apple’s Podcast app — which recently received a facelift — grabbed third place, followed by Find My iPhone. In fact, looking at the top 10 list, we can see that Apple owns half of the top 10 most-downloaded apps.