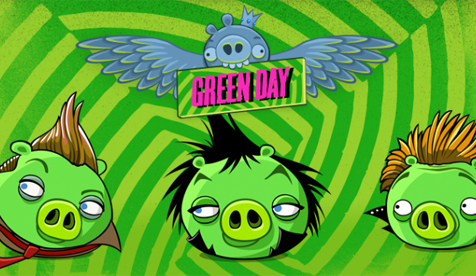 Do you happen to be a fan of both Green Day and the Angry Birds video game franchise? If so then “Welcome to Paradise”!

Rovio Entertainment has teamed up with the multi-platinum selling band Green Day to produce a brand new episode of the popular “Angry Birds Friends” Facebook game, which was originally released back in May of this year.

The game features ten bird-slinging levels. The target? None other than Billy Joe Armstron, Tre Cool, and Mike Dirnt. The rock stars are honoured with pig characters based on their likeliness. So now you will truly “Know Your Enemy”.

In addition to flinging birds at Green Day, you can simultaneously rock out to the band’s new single “Oh Love”, along with an exclusive track called “Troublemaker”.

More tracks and levels will follow through the last months of 2012, alongside three new Green Day albums – Uno, Dos, and Tre.

Initially the levels will only be released on the (free-to-play) Facebook version of Angry Birds Friends. However, Rovio has hinted that it may also be released for the iOS and Android versions on a later date.

This unlikely partnership may seem strange to some, but Rovio’s marketing chief Peter Vesterbacka feels otherwise:

“For us, it’s bringing Angry Birds to more people, and it’s the same thing for Green Day, bringing their music to a new audience,” he explains. “A lot of people that play Angry Birds haven’t listened to Green Day before, and a lot of fans of Green Day haven’t played Angry Birds before. On both sides, we want to expand the fanbase and expose more people to Angry Birds and Green Day, so it’s a very good fit. It’s two big green brands.”

It’s not that much of a surprise, as this isn’t the first time Green Day has partnered with a video game franchise. The band has also worked with the popular Rock Band series.

The game will be playable at http://greenday.angrybirds.com. To view a trailer of the game, watch the video blow:

To me the partnership seems kinda strange, and kinda pointless. I can’t see how this would either A) increase my enjoyment of Angry Birds, or B) make me a bigger fan of Green Day (or turn someone into a fan, if they’re not already.) But that’s just me.

However, I will say that I do like the new single, “Oh Love.”

Will you play the new Green Day episode of Angry Birds Friends?