The NHL season is on hiatus due to the lockout, but that doesn’t mean it should end the education of concussion awareness. Hockey Canada has officially announced the launch of their Concussion Awareness app, a tool made for parents, players and coaches to educate themselves about concussions. The app provides articles, videos and also lists directions to the nearest hospital should that be applicable.

The Hockey Canada Concussion Awareness app is a great tool for parents, coaches, trainers, players, administrators and anyone interested in learning about the prevention, recognition and response to concussion injury, including responsible return-to-play protocol. 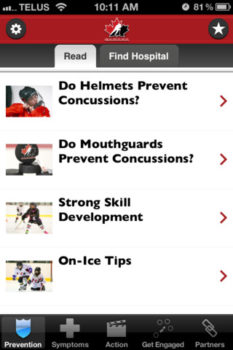 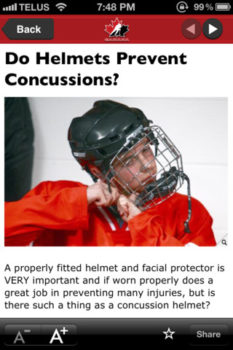 Sidney Crosby, who was directly affected by concussion symptoms last season has endorsed the app and called it a “commitment to educating families and players about all aspects of the game.”

The app was created by the Canadian Centre for Ethics and Sport, the Coaching Association of Canada and ThinkFirst Pensez d’Abord Canada, a joint effort funded by a $1.5-million grant from Ottawa.