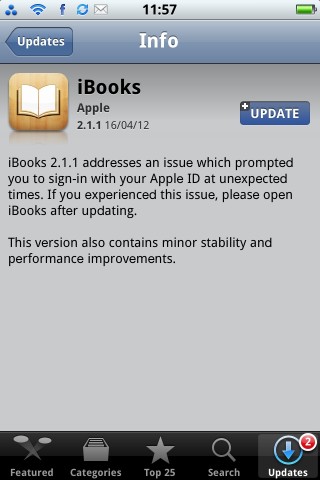 With the release of the iPad and the iBooks app, reading in iOS became a whole new experience. Folks with an iOS device could read ebooks in a whole new way. Some find the bright screen hard on the eyes, but for the most part reading on the iPad is a great experience. There has been some issues with the price of ebooks in the iBooks store, as the prices are often not any cheaper than an actual, physical book.

Apple has just released an update to the iBooks app, bringing it to version 2.1.1. Apparently, version 2.1 had some issues where it would randomly ask for your Apple ID and password. This has been fixed in version 2.1.1.

You can download iBooks 2.1.1 for free in the App Store now.