Imo IM app for iOS is not only one of the most popular free instant messaging clients on App Store but is also my personal favourite. The app has been getting frequent UI updates lately and today, the developers have added free unlimited voice calling feature to imo IM app for iPhone. Today’s launch is “perfect timing,” the imo.im announcement said, “given that mobile carriers are constantly changing plans and services, making it quite tricky for the average user to save money“. To make calls on your iPhone, simply tap the phone icon next to your contact’s name in imo IM app and talk for as long as you want without gobbling up any mobile minutes. 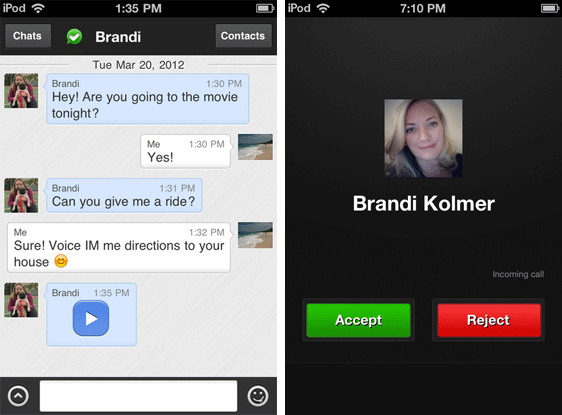 Below is the official press release:

imo.im, the instant messaging client that connects users to 11 of the top third-party messaging services, announced today the availability of free voice calling for iOS users. Currently available on Android devices, iOS device owners can now make voice calls to contacts using the app through Wi-Fi, 3G and 4G Internet connections. imo.im’s free voice calling eliminates the cost of mobile minutes without any loss in the quality of the connection and, when connected to Wi-Fi, requires no data usage.

iPhone users running iOS version 3.1 or higher can make voice calls in addition to connecting to top instant messaging services such as Facebook, AIM and Skype by downloading the update through the Apple App Store.

imo.im has emerged as a top instant messaging client, with more than 4 million mobile downloads and 700,000 daily users delivering an average of 50 million messages per day. imo supports private chat conversations and group chats and provides the ability to share multimedia files, send voice IMs and conduct quick chat history searches. Concurrent sessions allow users to continue conversations even while switching devices, such as from desktop to mobile and even between mobile platforms.

“At imo, our mission has always been to provide one place for family and friends to stay connected and maintain their close relationships no matter where they are located,” said Ralph Harik, CEO of imo. “The availability of free voice calling for iPhone users is a critical development for users looking to keep those valuable lines of communication open while saving on their mobile costs.”

The imo IM app is available for free at the following link: