The App Store is considered a great mobile application storefront, but a recent analysis of the App Store and its competition – Google Play and the Amazon Appstore – ranks Apple’s mobile app store well above the competition.

One of the biggest issues of the rapidly growing storefronts is discovery, which still awaits the best solution, although Apple has done an incredible job in providing discovery assistance. 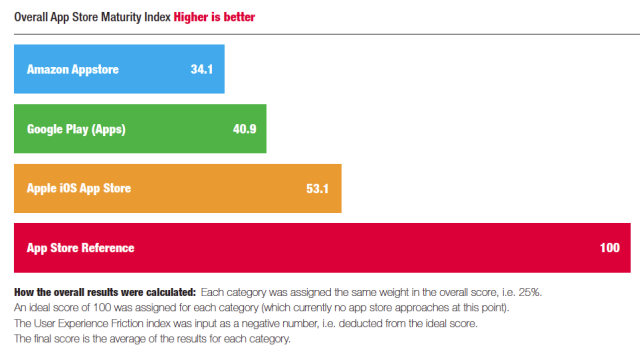 The report also points to the Apple Store’s weaknesses as well. As Pfeiffer puts it, Apple has the most mature storefront, but the company does not manage to completely open up the potential of its app environment. “What really sets the iPad apart from the competition is not hardware anymore, but the impressively rich device universe. One may wonder if Apple has fully embraced this notion”, the report writes.

Apple however, made great enhancements to its App Store, which pushed it above its competition in terms of discovery. The Pfeiffer report points to the 384 subcategories compared to the 8 of the Google Play, and 118 of Amazon’s Appstore. Another important benefit of the App Store is the 3773 specially selected apps that guide the user toward a curated selection of particularly interesting apps.

The three app storefronts were rated based on Pfeiffer’s 2013 App Store Reference Definition, which is an idealized set of features of a mature, sophisticated app store.