At first I thought I was losing my mind. What am I referring to? App Store updates on the iPhone of course! I’m pretty good with keeping up with app updates, as most of the time there are bug fixes and improvements. But lately, the usual reliable process of updating apps on the iPhone has been one giant FAIL!

App updates would download and install. I would watch the process with my own eyes. Next thing you know, the update reappears in the App Store, indicating the update is still there waiting to be downloaded and installed! What gives? I commented out to my fellow twitter peeps, and it seems others are also experiencing this problem.

I’m confident Apple is already addressing this issue. It’s been this way for at least a few days week or two now. Let’s hope it gets fixed soon. My app store icon shows 8 updates that need to be installed. Some of the ones I’m eager to update are WhatsApp, GolfCard, Ping!, Photoshop.com, and Movies. 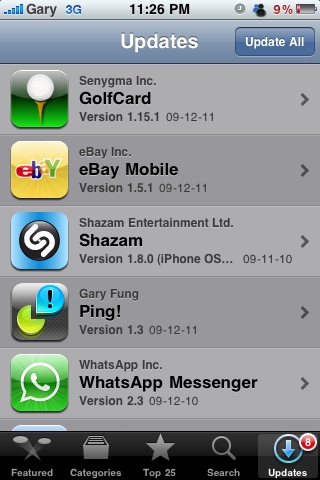 Have you run into any problems updating apps on your iPhone? This issue seems to be affecting updates via iTunes on via your computer as well. Let us know in the comments!