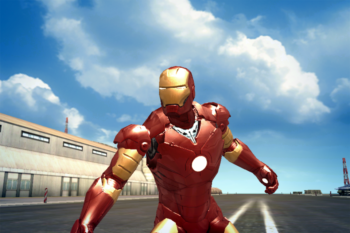 Ever dream of being Iron Man – flying through the air dodging missiles, and blasting guys in laser suits? Now you can on your iPhone!

Iron Man 3 – The Official Game is an endless flyer with plenty of enemies to shoot, attacks to dodge, and obstacles, like jets, trucks, and billboards to avoid. There are also daily boss battles, which start after you fly a required distance; you’re rewarded with ISO-8 when you beat them. You’ll also collect Stark Credits by flying into them, destroying enemies and completing missions. And after each flight you’ll earn XP. You’ll be using these currencies to unlock and build suits and upgrading them.

All 18 Iron Man suits look great in the menu, and during play. Although, precisely controlling their movement with either tilt or touch is not so great. This isn’t an issue most of the time, but when you need to avoid a street of full of trucks or a sky full of missiles, you’ll wish you had that precision. However, shooting enemies is really simple. Each of your swipes and taps will yield satisfying results.

One thing that annoys me is I have to spend XP or ISO-8 to unlock a suit, and then I have to spend Stark Credits to build it. This means if I don’t spend my real money, I’m going to have to play for hours and hours gathering XP or ISO-8 to unlock a suit, only to realize I have to play for a few more hours to earn enough Stark Credits to build it. Also, I’m sorry to report that Robert Downy Jr. is not in the game, and it just doesn’t feel right without him.

Iron Man 3 – The Official Game is a lot of fun, and if you like Iron Man or action packed endless flyers, it’s definitely worth your time. You can download Iron Man 3 for free from the App Store here. Then, let us know which Iron Man suit you love the most, and if you’ll be spending your time or money to get it.