iTunes has a free Book of the Week download and this week it’s Star Trek: Countdown to Darkness #1 (normally $2.99). This 24 page comic is part one of four comics, published in both print and digital simultaneously to set the stage for the upcoming Star Trek film.

First issue in an four issue series! Each 24 page comic is published in print and digital at the same time! The countdown to the motion picture event of 2013 begins here, in this blockbuster 4-issue prequel mini-series that sets the stage for the upcoming STAR TREK film! Like the best-selling STAR TREK: COUNTDOWN in 2009, this all-new series leads directly into the next movie, with a story by STAR TREK writer/producer Roberto Orci and Mike Johnson (STAR TREK ongoing series), and drawn by the original STAR TREK: COUNTDOWN artist, David Messina! STAR TREK: COUNTDOWN TO DARKNESS is the can’t-miss lead-in to the new adventures of the Enterprise crew! 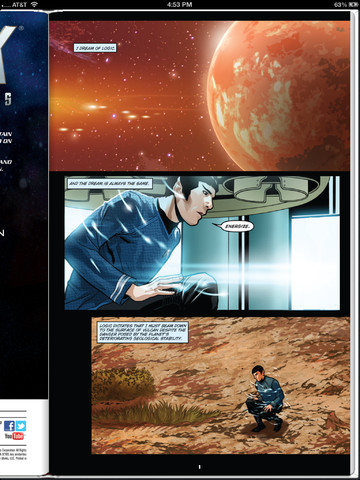 Click here to download Star Trek: Countdown to Darkness #1 while it’s free. You will be able to read this on your iPhone, iPod touch and iPad.