Before the holidays began, iTunes Connect shut down and temporarily stopped App Store updates and developer access until December 28. The shut down was to give employees time off during the break.

As promised, iTunes Connect is back online with App Store updates and submissions being accepted. The re-opening of iTunes Connect also allows developers to see their sales numbers over the holiday break.

Over the next few hours, users will see many of their existing apps being updated as submitted applications move through the review process. 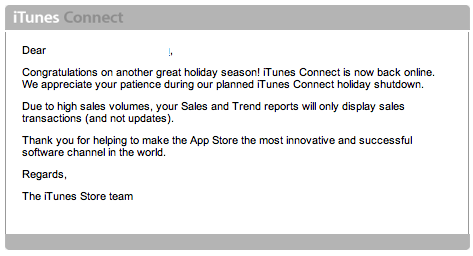