Klout, the San Francisco-based social media analytics company that measures a user’s influence across his or her social network by collecting data from sites such as Twitter, Facebook or Google+, has updated its official iPhone app today with Passbook integration. Users can now add their “Klout Card” to Passbook, which will display their name, photo and Klout Score all in one place (via TechCrunch). 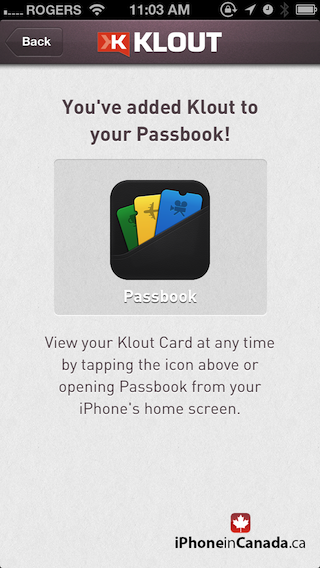 Klout awards its influencers through a system called ‘Klout Perks’, based on their Klout score. These Perks provide influencers with exclusive access to products, services and experiences that match their interests.

Since 2010, we have delivered more than 800,000 Perks to influencers through more than 450 partnerships. Some of our most recent Perks were also some of our most popular: free Sony X Headphones, early access to Nike’s Fuel Band and multi-day test drives of the new, electric Chevy Volt.

We’re excited to announce that as of today’s release, you will be able to discover and claim Perks directly from your phone. Our updated iPhone app will notify you when you are eligible for pre-qualified Perks, and then allow you to claim that Perk immediately, wherever you are.

We’re also taking our iPhone experience a step deeper by including a full integration with Apple’s new Passbook.

The app is now optimized for the iPhone 5’s taller display as well. You can grab it for free at the following App Store link.