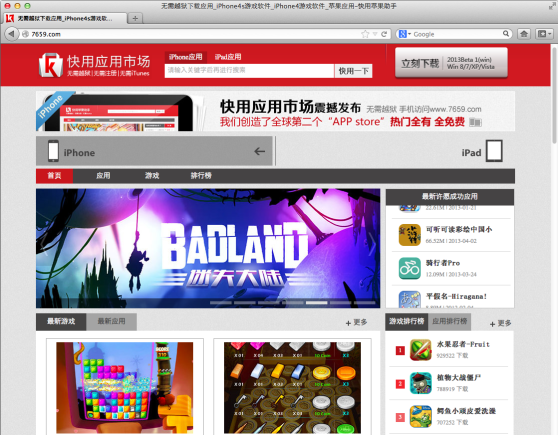 A knockoff App Store accessible at 7659.com is reportedly providing pirated apps to Chinese iPhone and iPad users for free. According to Venture Beat, the site is only available within China unless you spoof your location via a proxy server and offers a wide selection of new games and apps including Final Fantasy V, Badlands and much more.

The source details that the site seems to be distributing apps for free after getting a developer provisioning profile from Apple, which allows app distribution to an “unlimited number of iOS devices.” While it may appear to be a good thing for iPhone users who are getting free apps, it is not such a good thing for Apple or for the developers who expect to be paid for those apps.

“Thanks to this ingenious enterprise strategy, iPhone owners in China do not have to jailbreak their phones in order to install pirated apps — as Taiwanese blog MicGadget puts it, essentially the same app is being distributed, again and again, with the same license ID. That’s exactly how Apple designed in-house enterprise apps to work, although it’s not likely they envisioned the technology being used this way. Jailbreaking, of course, comes with the increased risks of bricking your iPhone, boosting vulnerability to malware, and blocking updatability to new iOS software”.

The site is provided by a front company called Kuaiyong, which appears to be owned by Beijing Technology Co Ltd. With thousands of apps being installed and presumably updated via the Chinese App Store, it’s difficult to see how Apple can remain unaware of what’s going on here.

Interestingly, Kuaiyong provides a short explanation of what it does for foreign Apple users, along with a justification for providing the pirated app store:

Our goal has always been about bringing Chinese Apple users with quick, convenient and pleasant IOS experience. Since the introduce of Kuaiyong, the proportion of jailbreak in China has declined dramatically from 60% to around 30%. Kuaiyong will hold on to this goal in the future and we would like to see more support for Apple as well as Kuaiyong.