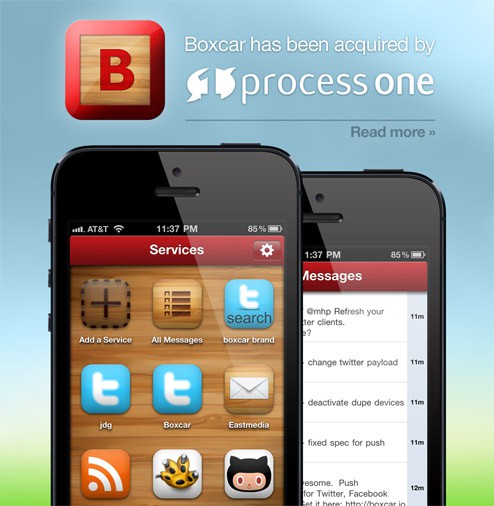 Last July iOS push notification service Boxcar was aquired by Kwaga. At the time it was reported both companies were set to improve and keep Boxcar running. Fast forward seven months later and now Kwaga has sold Boxcar to ProcessOne, a company with over 10 years of messaging experience.

“We’ve been working with ProcessOne for the last 3 months on rebuilding Boxcar notification infrastructure for the benefits of our user base. In the process, it became clear to me that ProcessOne was uniquely positioned to bring Boxcar to the next level and that it would be better if they were to keep operating Boxcar. We’ll keep working with the ProcessOne team to bring Kwaga smarterEmail algorithm to the notification world and will jointly address Boxcar existing user base.”

ProcessOne explains in a blog post it will expand Boxcar to “mobile developers of all size,” so expect the service to make it to other platforms. Boxcar is a fantastic way to see a timeline of all your push notifications, but has been consistently intermittent with its service as of last year.

We can’t wait to see what ProcessOne can do to improve the service and also finally bring iOS 6 and iPhone 5 screen support. The free Boxcar iOS app has not received an update since August of 2011.