Powerups, monsters, and the need to keep jumping delivers an amusing iPhone and iPod touch game in Mega Jump.

Mega Jump by Get Set Games

The goal of Mega Jump is to continually vault into the air while collecting as many points as possible while preventing the level from ending.

During game play, there are various powerups and coins thrown about the vertically designed level. Using the accelerometer, players navigate into the coins, stars and power ups and when making contact, the player is catapulted into the air.

In other words, the coins and powerups (such as Fireball and Super Nova) are boosters that keep the player in the air. If players miss a coin or power up and begin free falling for about 2-3 seconds, the game is over. There are also enemies throughout the game that upon contact, will reduce the characters health and eventually end the game. 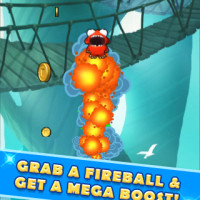 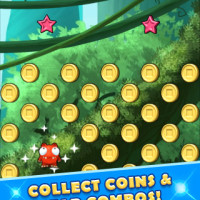 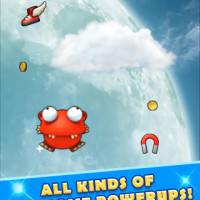 For the competitive players, Mega Jump includes OpenFeint support with online leader boards. Scores can also be posted to Twitter and Facebook to compete with friends and the game also includes many unlockable achievements in order to maximize your OpenFeint score.

The game sound effects are really good, but I highly recommend using headphones to get the full glory. While the game does include in-game music, I had to mute it as it became very repetitive.

Overall, Mega Jump is a great little game to pass some time. In my experience, the game is perfect for long waiting lines as game play delivers just enough variety to keep you playing.

Mega Jump is available in the App Store for $0.99.