The iconic New York Times updated their iPhone and iPad app with two new features recently, including a low bandwidth mode and the return of an automatic refresh toggle, according to the publication in an email to iPhone in Canada.

Senior Software Engineer at the Times, Véronique Brossier, explains she developed low bandwidth mode for the company’s app, during last year’s Maker Week, the news organization’s annual week-long developer event for new ideas. That feature is now available in version 6.7 of the NYT iOS app, made available earlier this month.

Low bandwidth mode offers users the option to disable automatic downloading of images and sections, to save their data plan and also for use in regions of limited connectivity when one wants to download the news but without multimedia.

Brossier recalls she came up with the idea after her time in Cuba in 2016, when Fidel Castro passed away. She tried to download reaction of the passing using the NYT app from her hotel, but data demands from the news app appeared to be too taxing on the limited network infrastructure in the country. 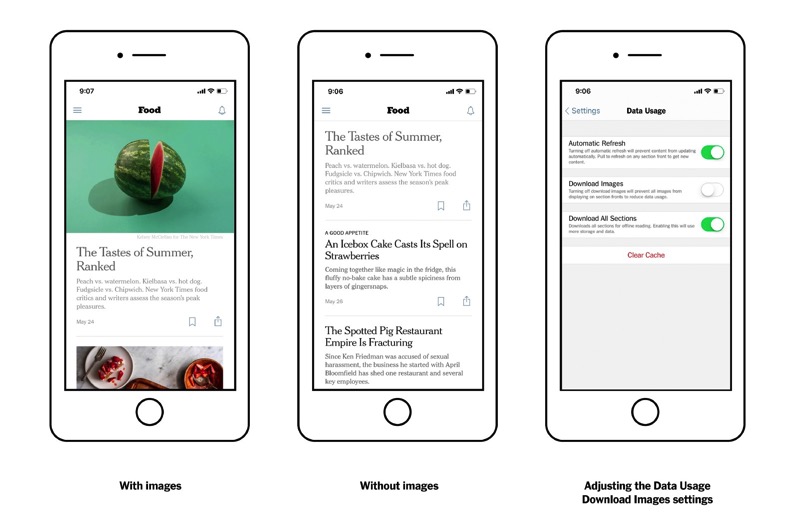 Also new in version 6.7 of the NYT app is the return of a toggle for automatic refresh. This means articles you see in the app will not refresh or update, until you manually refresh by pulling and releasing at the top of a section, allowing users to “read the news at your own pace.”

Last year, Brossier and her team completely rewrote the NYT app from scratch, building it with Apple’s Swift programming language. The app gained a new visual appearance and also became a universal app with an adaptive layout, a task she calls “a tremendous effort.”

Click here to download The New York Times for iOS in the App Store. It’s free but has in-app purchases for basic and all-access subscriptions.