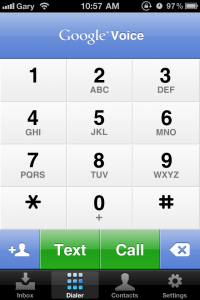 If you’re a Canadian and have taken the time to setup your Google Voice account, you will be happy to know that the official Google Voice app for the iPhone is now available. Previously, Google had created a web app for Google Voice as their app was rejected from the App Store.

Listen to your voicemail, read transcripts and manage your Google Voice inbox.

Call contacts from your iPhone Address Book or enter new numbers on the dialpad.

Google Voice is only available in the United States.

From the Google Voice Blog:

Earlier this year we launched a Google Voice HTML5 web app for iPhone users. Today weâ€™re taking the Google Voice experience on the iPhone to a whole new level with the launch of the official Google Voice for iPhone app.

With this native app, youâ€™ll continue to have access to all the major Google Voice features on your iPhone, like:

In addition to these benefits, the app provides some features that make using Google Voice on your iPhone a much better experience:

* With push notifications, the app will alert you instantly when you receive a new voicemail or text message
* Most of your calls will be placed via Direct Access Numbers, making them connect just as quickly as regular phone calls

Update 1: Google Voice is not available in Canada yet, but there are workarounds.