After CIBC Mobile Banking getting a major update yesterday for Touch ID and iPhone 6, PC Financial Mobile has followed suit. The Loblaws banking service, which is provided by CIBC, has gained a major iOS update today which adds support for Touch ID, Apple Watch, iPhone 6 displays and “support for your tablet.”

What’s New in Version 3.0
Check out the app’s all new design, tailored to the iPhone6 and above, plus, improved features and some new ones you’ll love, including Touch ID, Apple Watch and support for your tablet.

Now you can easily access details on your deposit and investment accounts, mortgages and loans. You can view Online Statements, cheque images, and account activity graphs (from your tablet). You can also register for and manage INTERAC® e-Transfers. 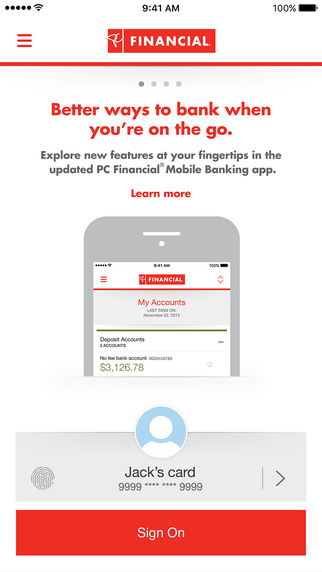 The app says you can now also easily access details from your deposit and investment accounts, mortgages and loans. Essentially, it looks like a clone of the CIBC Mobile Banking app, which is no surprise.