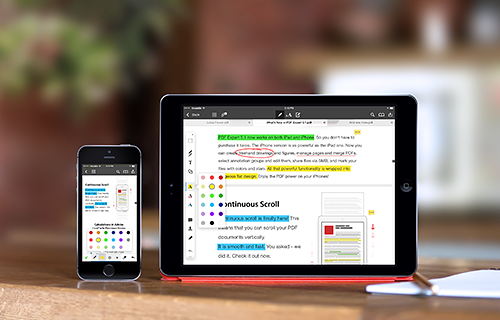 Readdle is set to release PDF Expert 5.1, in what they are calling their “biggest and most important update” for the app this year, as it is set to go universal for iPhone and iPad, pulls gain new features. PDF Expert 5 was released for iPad last December, but 5.1 will bring iPhone support.

PDF Expert 5.1 will feature continuous scroll, calculations in LiveCycle Designer Forms, work two times faster. After becoming universal, this update will replace the existing PDF Expert 4.7 for iPhone, which will be removed from the App Store—not until making it free that is:

PDF Expert for iPhone is FREE.
The current iPhone version of PDF Expert (4.7) becomes FREE starting today. The regular price was $9.99, so you might want to grab it from the App Store. It is still a great app to annotate and sign PDFs right on your iPhone. It does support form filling and other cool features. On May 29th, PDF Expert 4.7 (for iPhone) will be removed from the App Store.

Click here to download PDF Expert 4.7 for iPhone while it’s still free and in the App Store!