If you’re an avid user of Twitter’s Periscope, the company’s iOS app has been updated today to bring a new zoomable map that allows users to explore broadcasts worldwide, allowing for more control to see regional streams.

What’s New in Version 1.1
[+] New ‘Map’ section added to Periscope which lets you explore live broadcasts from around the world on a zoomable map. Tap ‘Map’ from the ‘Global’ section to access a live view of top location-enabled broadcasts from around the world.
[+] Replays are now instantly available – no need to wait for a replay to upload after broadcasting (you may still delete a replay from the ‘Home’ feed).
[+] You can now share the link to a broadcast you’re watching on Twitter.
[+] Periscope is now localized in 29 languages: English, Japanese, Spanish, French, Italian, German, Korean, Russian, Turkish, Portuguese, Dutch, Indonesian, Simplified Chinese, Danish, Finnish, Polish, Norwegian, Swedish, Thai, Arabic, Czech, Hebrew, Hindi, Hungarian, Malay, Romanian, Traditional Chinese, Ukrainian, Vietnamese.

Here’s an image of the new map feature—as you can see, not many broadcasters are in Western Canada at this particular moment in time: 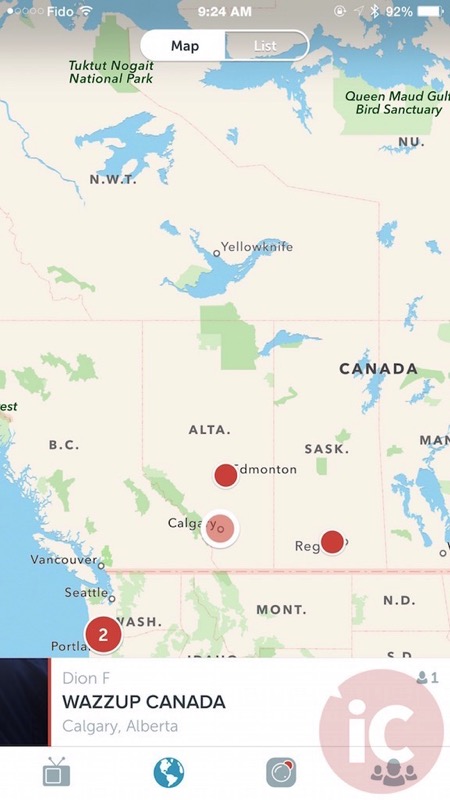 Broadcast replays are now instantly available, eliminating the need to wait for a broadcast to upload, while you can now also share a link to Twitter of a broadcast you’re watching.

If you’re not on Periscope yet, you should join because not only is it an excellent waste of time, but it’s actually useful to seeing breaking news or events in real-time. Also, we’ve been using Periscope for some unboxing videos lately, in particular for Apple Watch and more. So follow us if you want the inside scoop on what’s going down in our world.