Quartz has launched a news app for iOS—but wait—it’s not like a traditional news app like everybody else. This one is pretty creative, as it makes consuming the news feel like you’re having an iMessage conversation with someone, down to the blinking dots to indicate someone is typing:

It’s pretty simple. Here are some other features:
• Notifications that are relevant and fun. You decide which alerts to receive, and we won’t buzz your phone unless it’s really, really important.
• On the Today screen, view our most interesting chart of the moment.
• Apple Watch owners, gauge the markets with an emoji on your watch face.
• No more news? Relax. We’ll give you a quiz or something else to do.

The organization says the news is written by their journalists and is made to be consumed in a spare moment when you have it.

When an initial news ‘text’ arrives, you have two choices: to either learn more or skip to the next story. But what makes it fun is when you want to find out more, Quartz poses a question or throws in an accompanying emoji. If you tap on the news headline, it’ll take you to the full length Quartz article.

Below on the left is a screenshot from the app’s intro, which also teaches users how the app works. On the right is what typical interaction looks like with the app, which also has some fun with users (hello Leo)—and seamlessly blends in an advertisement (nice one): 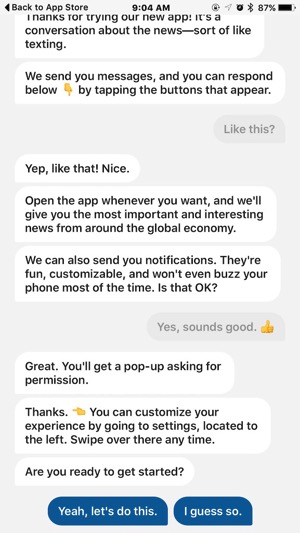 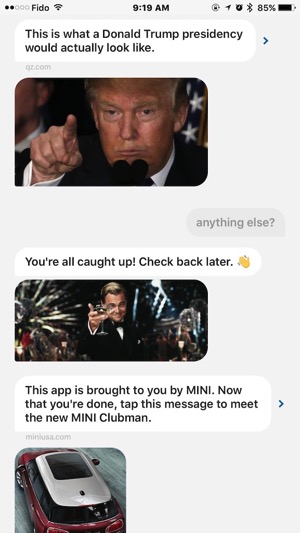 This news app from Quartz is definitely refreshing and brings little tidbits of news in an interactive way, for those that don’t have a lot of time to read full length articles. It’s definitely worth checking out, despite the U.S. focus. There’s also an Apple Watch app too to keep you connected.