Update 1: Looks like the free promo period has ended. It was a nice grab while it lasted.

CreativeNchildren (CnC) have just made their three best selling iOS apps totally free in the App Store. The apps are a part of the Quick™ Series i.e Quick™ Light, Quick™ Snap and Quick™ Video. The developers claim that all these three apps are the quickest among the competition in the App Store. All three have no loading screens and no menus. They say that “when there’s no time, touch Quick Light, Quick Snap or Quick Video and point to start shooting / lighting as fast as possible.” The apps were available for $0.99 each before they went free today. 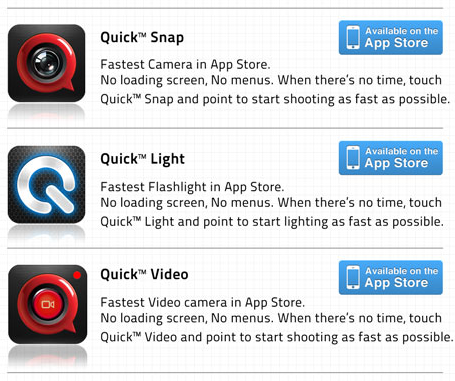 Here are the iTunes descriptions and direct download links:

•No loading screen, No menus. When there’s no time, touch Quick Light and point to start lighting as fast as possible.

•No loading screen, No menus. When there’s no time, touch Quick Snap and point to start shooting as fast as possible.

•No loading screen, No menus. When there’s no time, touch Quick Video and point to start recording as fast as possible.