Quip, the mobile word processor for iOS and Mac OS X devices designed by former Facebook CTO Bret Taylor, has launched in the App Store. The app stands out with features such as a mobile-friendly mobile editor interface, integrated to-do lists, and collaborative features such as file and folder sharing with multiple users. 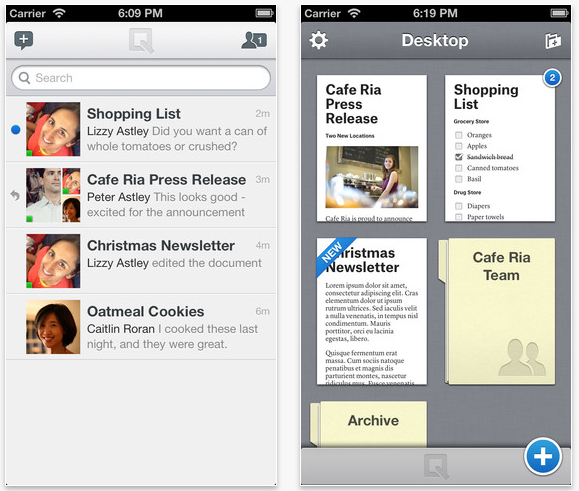 After sitting down with Taylor, TechCrunch has obtained more information about the app and its background. The app fills a gap that Microsoft has missed: first of all it’s free, and it has taken the opposite direction to Microsoft’s tactics. While it works on desktops as well, what is outstanding in Quip is that it is designed for mobile, the new trend.

“Quip is a modern word processor optimized for the era of tablets and phones”, Taylor tells me. We’re in the middle of a transition away from the desktop computer, yet word processors have stagnated. For dramatic effect, Taylor dropped a screenshot of MacWrite (shown to the right) into the Quip introduction post, and told me “It’s comical how similar that looks to what we use today.”

So what makes Quip different?

First it adapts documents to whatever size or shape screen you’re working on. If you’re on an iPhone, an embedded photo could appear full-width, but on an iPad it would appear on the right surrounded by text.

The collaboration tools might be the most exciting part. You can share any document with another user, and when they first open it you’ll get a notification. Taylor says this lets you jump in and walk them through the doc using Quip’s internal messaging system. “It feels like sitting at a desk with someone around a piece of paper” Taylor tells me.

Quip is a free app, and prompts only for an email address — you will need to share your email password with Quip when registering — and it allows up to five users to download and collaborate using the app, using features such as offline access to docs, editing and cross-platform syncing. Business licenses come at $12 per month.