Apple has just unveiled the next major update to OS X called the Mountain Lion with support for AirPlay & Game Center and it appears that Firemint is already set to take full advantage of these new features with announcement of an exciting update to Real Racing 2 for OS X Mountain Lion. Real Racing 2 For OS X will be fully integrated with Game Center and will support online multiplayer invites from iOS devices. Real Racing 2 will also offer seamless synchronization of any saved game across iOS devices and Mac with this update. 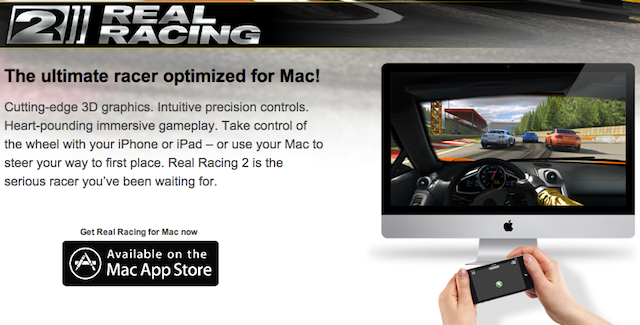 On the back of the recent Apple announcement to reveal Mac OS X Mountain Lion is the exciting news that Real Racing 2 is set to deliver a fully-featured update, notably including support for Game Center and AirPlay.

Real Racing 2 for Mac will be integrated with Game Center to include achievements,  leaderboards and the hotly requested friend invites for online multiplayer. For our existing Mac players, we have listened carefully to your feedback and can divulge now for the first time that Real Racing 2 will offer seamless synchronization of your save game across iOS and Mac.

The addition of AirPlay to OS X Mountain Lion further drives the amazing gameplay options now available to players, with Real Racing 2 for Mac again supporting AirPlay at a launch – just as it did with the launch of iOS 5.

Of course, you don’t need to wait for OS X Mountain Lion to burn rubber on your Mac! Grab Real Racing 2  on the Mac App Store now!

You can grab Real Racing 2 from Mac App Store using the following link: