For soccer fans, Rogers has announced the launch of exclusive live access to non-televised and taped delayed European football to Rogers customers, with the ability to stream games from the Rogers Anyplace Live TV iPhone app (formerly known as Rogers Live):

“At Rogers we are passionate about world-class sports and along with millions of Canadians, we love to take in the action in real-time, wherever we are,” said Anthony Antonelli, senior director, sports and on demand services, Rogers Communications. “Soccer is one of the most thrilling sports to watch live, and now our customers can catch multiple international league matches live at one time, on the device of their choice.”

The app is a free download, but a $5/month charge will be required to bring 5 hours of viewing (with overages charged at $1/hour/month). The iOS app provides the details on how to subscribe:

This fee is prompted when selecting an eligible title or you can subscribe upfront within the “My Services” section of the application. To unsubscribe, go to “Settings>Account” and click the “Unsubscribe” button.

A current promotion offers unlimited overages until April 30th, 2013 (the app description states Oct. 31st, but it needs to be updated). The app works on all iPhones and works over 3G or WiFi, with the former required to authenticate your subscription. Current reviews of the app in iTunes indicate the app requires improvement as some users have been frustrated it does not work properly. 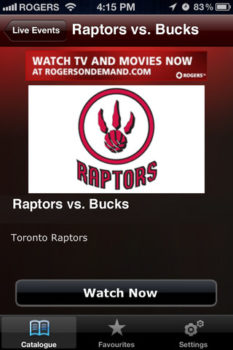 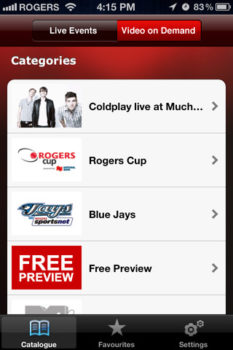 Click here to download the Rogers Anyplace Live TV iPhone App. Anyone currently subscribing to this? Bell customers have a similar app to watch live TV and sports.