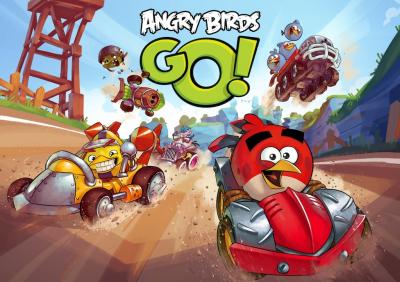 Rovio has announced its racing game Angry Birds Go! (which looks to be inspired by Nintendo’s classic Super Mario Kart) will launch on December 11.

The game will be built from the ground up as a free-to-play title, with a whole host of modes and features included from the get-go. In Angry Birds Go! you can feel the rush as you fling down the track and go head-to-head in a fast and furious race to the finish line! Look out for treacherous roads, mischievous opponents and unique special powers to put the race leader behind the pack. Plus you can go from homemade soapbox car to a super-fly car by upgrading your ride. It’s all there, along with crazy stunt and air tracks, and many fun and surprising game modes. The game will be out on iOS, Android, Windows Phone 8 and BlackBerry 10.

Below is the official trailer:

The free game will also feature Hasbro’s TELEPODS, so existing users will be able to teleport their favourite karts into the game. Anyone looking forward to this? It could just be another smash hit from Rovio.