Scotiabank for iPhone Adds Ability to Manage Investments on Mobile

Scotiabank has update its iPhone app to allow customers to manage their investments from their smartphone, specifically TFSA contributions and withdrawals, GIC renewals and purchases, and Savings Accelerator transfers.

Also new is the ability to register for InfoAlerts within the app if you’re subscribed to paperless banking for your credit card statements.

Scotiabank mobile banking introduces new Investment functionality such as TFSA contributions and withdrawals, GIC renewals and purchases,and Savings Accelerator transfers. If you’re opted for Paperless banking, you can now register to receive an InfoAlert when your monthly credit statement is issued. 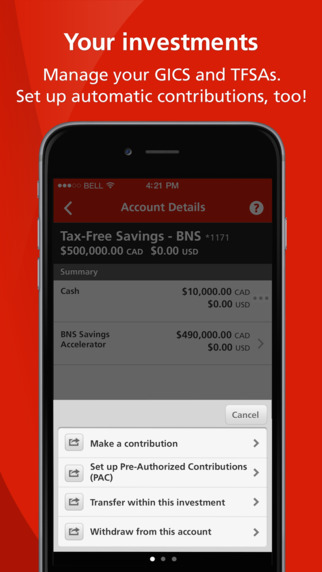 Unfortunately customers waiting for mobile cheque deposit look like they’ll have to keep waiting as that feature has not arrived yet.