Shaw Go: Movie Central was recently released in the App Store for Shaw and Shaw Direct Movie Central subscribers to stream up to 720p HD quality from over 600 shows right to their iPhone and iPad from anywhere over both 3G and WiFi. Do note the app has 3G streaming on as default so you’ll want to switch to WiFi to save your data plan in the settings.

? Layered Navigation: Menus optimized for touch screens, allowing navigation between top content levels with the swipe of a finger.
? Cinematic View: Bold visual layout with large-format imagery that brings premium Movie Central content to life.
? Smart Search: A predictive search and discovery tool that lets you find the content you want, faster.
? Intelligent Streaming: Best-possible video quality at any connection speed, all the way up to 720p HD over WiFi.
? Video Bookmarking: Stop a video and pick up right back where you left off… never miss a moment.
? Social Sharing: Share your experience with friends using your favourite social media tools, including Facebook and Twitter.
? AirPlay™: For Shaw and Shaw Direct customers who have Apple TV, stream Movie Central from the app directly to your TV.

Of course, this app is only available for Shaw customers. The inclusion of AirPlay is a nice touch, as that’ll allow you to stream to any TV hooked up to an Apple TV, which is cheaper than purchasing another cable box or PVR. Let us know how this app works out for you. 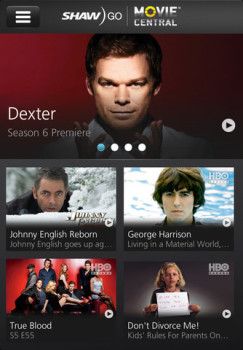 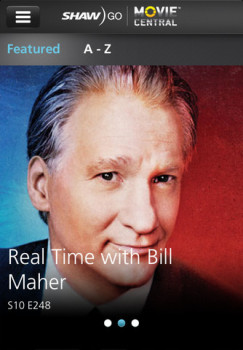