Shaw today has officially announced the launch of their HISTORY Go iOS app for iPhone and iPad, which allows subscribers to watch the History Channel live, plus have access to full length episodes, clips and more. Full seasons of the channels top shows including Ice Pilots NWT, Pawn Stars, The Curse of Oak Island, American Restoration, and Appalachian Outlaws will be available.

The app contains close to 300 hours of programming, which includes 250 hours of Canadian content among 20 HISTORY series. It launches just in time for the debut of season two of the hit series Vikings, arriving tonight.

Highlights of HISTORY Go include:
– Full length episodes, web exclusives, and clips
– Live streaming of HISTORY channel; take your favourite specialty channel with you wherever you go!*
– Two-week look-ahead schedule of HISTORY programming
– Theme-based content collections, such as Remembrance Day 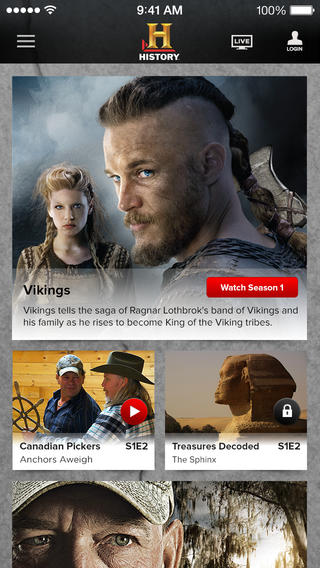 Customers with Shaw, Shaw Direct, Rogers Communications and along with numerous CCSA distributors can get access today. TELUS Optik TV and Cogeco Cable Canada customers will have access in March.

Shaw previously launched Global Go for iOS, which allows users to watch Shaw content on their iPhone or iPad.