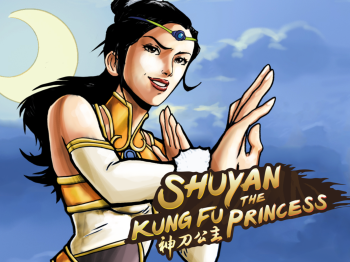 The first episode in the five part series, Shuyan The Kung Fu Princess is the start of an intriguing story that’s told in an interesting way. Unfortunately, it was not a smooth experience. 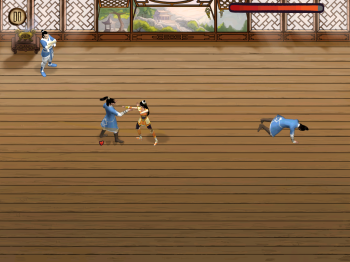 There are two level types, one where you fight in an arena

You play as Shuyan, a princess that runs away to a Kung Fu temple. By the end of the episode you won’t have all the details of her story, but you will learn a little about Kung Fu. You will also have a very good understanding and handle of the controls. They are slowly introduced to you as a part of the telling of the story and you are given ample opportunity to practice and master them. You start by learning how to punch and move around, then you’ll soon learn how to dodge, block and slap, and find out why they are important in Kung Fu.

What I like most about Shuyan is the beautiful artwork and that you learn a little about Kung Fu by playing through the game. I’m allowed to punch people into submission at the start, but as I progress I’m taught why blocking, dodging and slapping my opponents are better actions. I’m looking forward to seeing what other moves I’ll be taught in the coming episodes.

What annoyed me though was this bug I encountered that would remove all sound effects, then crash the game. It frustrated me because it kept occurring about a half dozen times in the same level even after I closed and reopened the app and after I restarted my iPad (4th generation). Mercifully, it stopped occurring for no apparent reason and I was able to finish the episode. It didn’t ruin the experience for me, because it only occurred in one level, but it was frustrating. 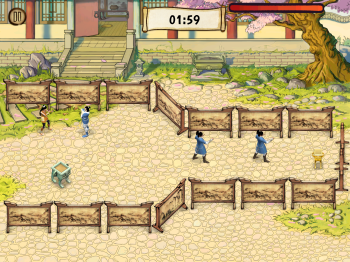 Another where you move rocks and avoid getting hit

Shuyan The Kung Fu Princess is an enjoyable experience. Even though it crashed a few times, the intriguing story, beautiful art work and fun gameplay make Shuyan a worth while experience.

You can download Shuyan The Kung Fu Princess for $2.99 in the App Store. What’s your favourite Kung Fu game or movie?

Note: this app has been updated since the time of this review, so the bug I mentioned may have been fixed.