Siri Competitor ‘Evi’ Available And Not Just For The iPhone 4S

Evi is the new girl on the block and she wants to be your new voice-activated personal assistant.

True Knowledge has released their version of the assistant in your pocket. It’s a tall order, creating an app with the ability to convert speech to text, understand the context of that text and apply it to a database to retrieve an answer. According to reports, Evi handles these tasks beautifully and she’s not restricted to the iPhone 4S. Sadly, in my own tests of the application, she was unable to retrieve an answer. 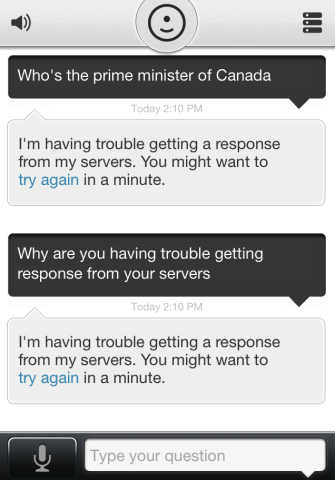 Still, the application holds promise for Canadians currently frustrated with Siri’s incomplete knowledge of Canuck geography. While Siri is still in Beta, her suggestions seem to often revolve around doing a web search. Evi on the other hand seems to have the chops to get you solid answers employing the likes of Yelp among other traditional search engines.

“Ask “Who was President when Queen Elizabeth II was born”. Siri is unable to provide an answer and suggests performing a web search. Evi determines who Queen Elizabeth II is, when she was born, the dates when she will have been a teenager and then compares this against which US presidents were in office over that time, delivering the results of both serving US presidents during those years. Not bad huh.”

On the downside, Evi does lack system integration meaning that she won’t be able to add events to your calendar or read you your text messages, applications where Siri can really excel. Might we one day see Evi integrated to that capacity?