Skype for iPhone now supports your higher resolution iPhone 6 and iPhone 6 Plus. Today’s update also brings a couple tweaks, such as showing presence indicators in your ‘recent’ list, plus adding time zones to contact profiles. The full change log is below:

What’s New in Version 5.6
• Native resolution support for iPhone 6 and iPhone 6+
• Presence indicators are now displayed in the “recent” list
• Number of contacts and time zones are now shown on contact profiles
• Individual conversations can be marked as read/unread
• Notification sounds are disabled in “Do not disturb” mode
• General Improvements 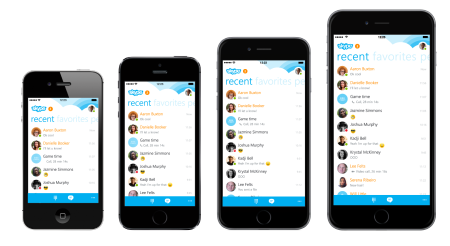 Skype says their latest update is “our second release that continues to build on the new iOS 8 extensions.” We saw that first Skype update last month when iOS 8 was released, which added support for interactive notifications.