Rogers customers can now access all 7 regional Sportsnet channels for live streaming TV inside the Sportsnet NOW iOS app (of course a Sportsnet TV subscription is required). The channels included are:

Pary Bell, Vice President of NHL & Sportsnet, Digital Media, Rogers said in a statement “This is the pinnacle for sports fans, having the game in the palm of your hand or watching sports highlights from wherever you are – simply never missing a moment.” Expect Rogers to leverage their $5.2 billion NHL deal through Sportsnet NOW and their 700MHz spectrum.

Sportsnet NOW is also accessible on a computer where it allows for quad-screen viewing. A single account can support up to four logins at the same time for families and also users can setup notifications to be alerted two minutes before selected programs begin. 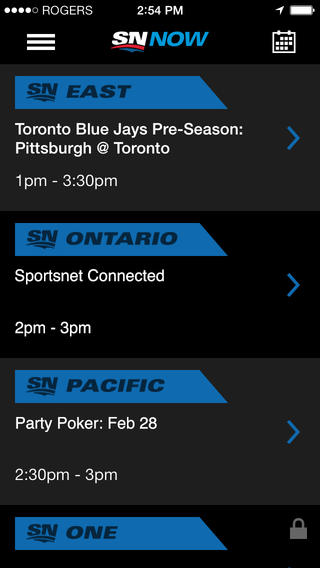 Click here to download Sportsnet NOW for iOS—it’s free and Rogers TV subscribers get an exclusive preview right now (so if you’re not a Rogers customer you’re out of luck).