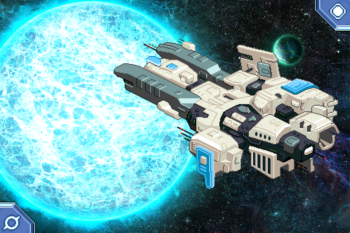 Over two years since its first Kickstarter campaign, Star Command is now available on the App Store. Star Command gives you control of a starship and its crew, then throws one of the dangers of space at you. Aliens.

Star Command is a short linear adventure with a lot of action, but little depth. Sure you can customize your starship by choosing what rooms to build, where to build them, and what crew members to recruit. But the story is simple and though you can choose dialog sometimes and the order you’ll travel to the available planets in during the second act, this doesn’t have much of an affect on what happens. 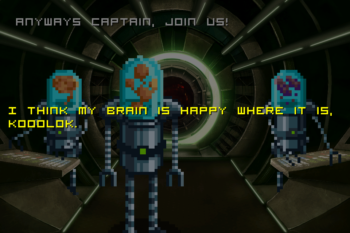 Your going to meet 10 unique alien species, and have an odd conversation with each

Ship to ship combat is tense, because you have to wait for weapons to charge and ammo to build, but it is limited. You can build two weapon rooms, either a Machine Gun, Laser Cannon, or Plasma Cannon. Each has a unique mini game and how well you complete it will affect your weapon’s performance. You can also build a Dodge Generator, which allows you to evade an incoming attack, and a Shield Booster, which regenerates your shields. That’s about it for ship to ship combat. Your biggest challenge are the enemies that board your ship. You’ll have to hunt them down with your red shirt crew members or they’ll kill your defenceless blue and gold shirt crew members and destroy your rooms. 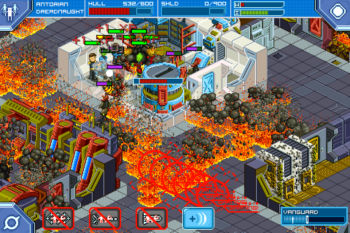 This is going to happen a lot…

I did find something unexpected in Star Command. It was that my shields could fail, my rooms and floors could catch fire, and my hull could breach, but my ship could not be destroyed. This means that no matter how many times my ship was hit I could keep going as long as my Captain and the Midorian Princess were alive. Therefore, I see Star Command more as a game about keeping your crew alive, because winning requires everything else to be secondary. And I don’t think this is a bad thing, just unexpected. 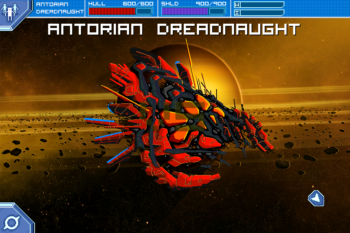 Every ship in the game is a work of art

Star Command is good game, but its lack of depth keeps it from being great. You can buy Star Command for $2.99 from the App Store here. Then, tells us who is the greatest starship captain.

(The correct answer is Mal)