A long time ago in a galaxy far, far away…a Star Wars lightsaber application was released. This app, Star Wars: Lightsaber Unleashed, was my most favorite iPhone app because not only am I a fan of Star Wars, but the app turned my iPhone into a lightsaber!

When the app was started, users were able to choose their lightsaber hilt and color and then by waving your iPhone in a sword-slashing motion, the app produced the actual lightsaber sound! After the novelty wore off, users such as myself wondered how we could duel our friends with this app. Well now you can!

Lightsaber Duel also features 11 new characters, bringing the character total to 15 and users may also create their own character with custom photo.

Star Wars: Lightsaber Duel is available in the App Store for $0.99. Check it out! 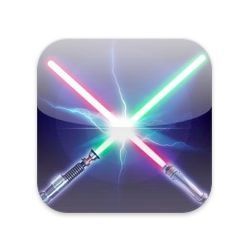