Starbucks has released a minor update to their iPhone app, which now improves how the Store finder map works, along with some other feature enhancements.

When you launch the Store finder map, it will now automatically display Starbucks locations near you. 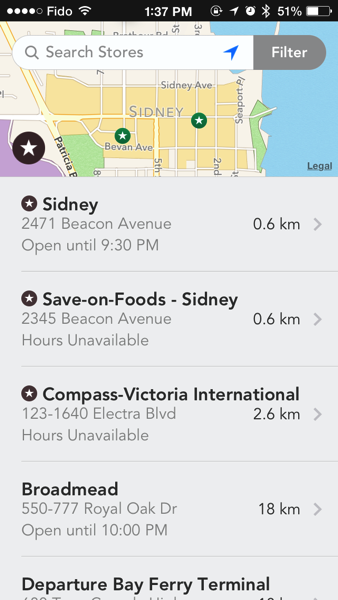 Also, a new Starbucks card can be easily added by tapping on ‘Pay’, then swiping on the card image to the right to quickly bring up card entry details. Also, for eGift redemptions, opening links within your email will now open the Starbucks app directly.

What’s New in Version 3.1.1
We’ve made a few changes we think you’ll love.

Stores: Now the Store finder map opens right at your location. Use the navigation arrow to easily reposition.
(We also fixed the “no stores found” issue). Thanks for your suggestions and patience.

Add a Starbucks Card: We’ve made it easier to add a new Card to the app with some visual enhancements.

eGift redemption: Get an eGift? Now you can use your mobile device to get it from your email—to your app.

The Starbucks iPhone app was updated for iOS 7 back in March, bringing an all-new design and features, such as shake-to-pay to quickly bring up your card.