Each week Starbucks offers a “Pick of the Week” card, which has a promo code to download something from the App Store or the iTunes Store. It could be a song, an app or game, or a video. This week we get a TV episode.

If you pick up one of the cards from Starbucks this week, you can download “The Cat in the Hat Knows a Lot About That”, for free. Simply use the promo code on the card to redeem the episode in iTunes. 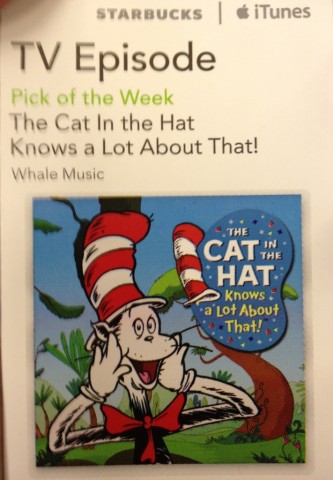 The Cat in the Hat Knows a Lot About That! is designed to spark a love of learning and an interest in science in preschool-aged children. In each program, the Cat in the Hat (voiced by Martin Short) and his friends Sally and Nick go on a science adventure, finding the answers to their questions like, how is honey made? What does nocturnal mean? And sho lives in the rainforest? Guided by the silly, loveable Cat, the children ask questions, make observations and predictions, plan investigations, collect data, and make discoveries about how the world works. Based on Random House’s best-selling Beginner Book collection, “The Cat in the Hat’s Learning Library™,” the show is designed to inspire a love of science in your child.

Hurry in to your local Starbucks and grab one of these cards before they are all gone. Thanks to @swotam for the tip.